SPIRITS OF THE MIND 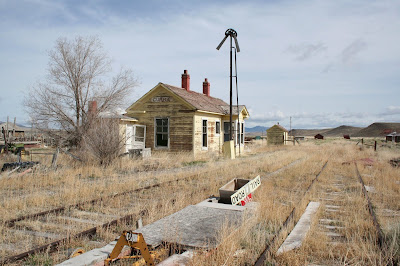 There are experiences in life that draw us in, make us pause in life and feel our being. They only happen rarely but can linger like spirits in the mind.

I remember one spring when I drove into the high desert with my camera. Snow still capped the Ruby Mountains as I drove down route 93. The grayness of the day and cold wind made the drive long. Then suddenly I turned a bend in the road and there stood an abandoned train station. The rails grown over with grass, the faded planks and train signal still standing tall. I stopped and grabbed my camera from the back seat. When I turned, the wind stopped and sun broke through the clouds. The desert warmth bathed my face and being. The station made brighter by the sun, almost like it wanted to live again. As I leaned against my car enjoying the sun, I imagined the goodbyes and greetings that were once part of the station. The people roaming about. I wondered what might have befallen this place. The desert eerily quiet, without the wind, gave no hints, but there was a thickness of life in the air. The experience still lingers with me. A mixture of peacefulness, beauty found and mystery.

True Spiritualists would give a deeper meaning to this, even going so far to think life does not end with death. That the consciousness we feel continues just in a new condition. Death simply a doorway into another spirit world. One that could be contacted through Mediums after death.

The Spiritualist Movement flourished between 1840 and 1920. At its height there were eight million followers. Purported Mediums abounded during this time, some becoming famous such as Madame Helen Blavatsky, The Fox Sisters, Eva Carriere and Ann O’Delia Diss Debar. Even some in the scientific community became followers. However, the original movement largely died out as frauds and charlatans were exposed.

While the movement had at its core philosophy dealing with the afterlife, they held other beliefs both interesting and thought provoking. Key among these is the belief in an undefined intelligence that exists in a Devine state. One that communicates with us through nature, things and people we experience.

The Spiritualists felt these fostered inspirations, intuitions, clairvoyance and healing. They also believed that how you used these largely determined your life’s fate. Followers never claimed spiritualism was a religion. Rather they thought of it as a philosophy for living. One that was bolstered by being open to and experiencing the world around us fully. Using the knowledge gained, the intuitions if you will, to better our lives.

I am not a believer in spiritualism per se. However, I am not sure one can deny some of the thoughts we have at times. Experiences can transport your thoughts. When you visit great battlefields, memorials and other places where tragic events happened, you do feel a certain presence and pain. The grass at the Custer Battlefield Monument has a reddish color at sunset. The Vietnam Memorial in DC transport you back to that time in the drama and tragedy of the 1960’s.

Some pure nature driven experiences make you go deep inside. Events like the trade winds washing over you in Hawaii, the warmth of a desert sun on your face or the rhythmic waves hitting a deserted beach. If you pause and listen, they teach you to stretch time. These experiences linger and offer safe memories to retreat into long after they end.

Do spirits exist, does the universe have an intelligence and does it communicate to us through nature and unique experiences we come upon. I will always think there is a certain truth to this, undefined as it might be.

Maybe it will always be just that. I am alright with that. The world can seem hard at times, unbending. Experiences that take you away for a time, make you think about your life and feel the pureness of just being are worth embracing. Especially if they foster enlightenments that better our lives

So, this year and years following I hope to travel and move through the world as openly as possible. Listening to nature and experiences, feeling what I feel and valuing inspiration gained.

Readings: “The Rise and Fall of Mediums” by Rebecca Oconnel, Serenity Association www.livinglight.organd the teaching of its founder Richard Goodwin, “The Psychology of Spiritualism” The Guardian 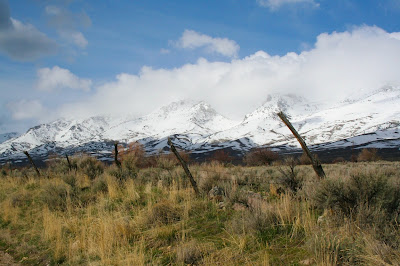