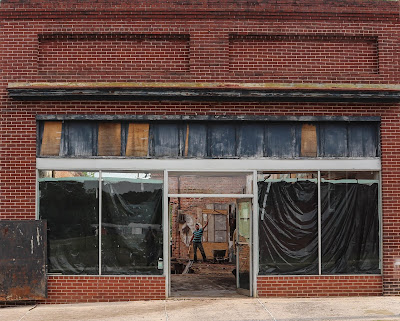 Arrows, cotton, indigo, Industry, Rail Roads, Movies and Political Intrigue all crossed paths here. Through all of this, Chester remained a picturesque little city on a hill only one square mile in size.

Chester is not a tourist destination, but there is much of interest here. All painted against the colorful hues of the buildings and steadfastness of it’s people. It’s a place where you can take your time to wander the hillside streets, get to know the people and enjoy a good meal. I find myself traveling back to Chester numerous times with my camera, always discovering and learning something new.

Chester County dates back to 1750 and the city of Chester was charted in 1840. The area has seen a lot of history. Located between two rivers, the Catawba to the East and the Broad River to the West, the surrounding land is very fertile. The Cherokee and Catawba Indians fiercely fought over this land they favored for its hunting and fishing. The tribes eventually came to an agreement to share the land, which also provided a safe place for settlement to take place. Settlers largely came from Pennsylvania and Virginia, many of Scottish and Irish heritage.

The original crops grown of tobacco and rice gave way to the more profitable crops of cotton and indigo. Large textile mills were built and the region became a leading producer. Five Railroads vied for the growing business and the town prospered.

From the top of the hill, you might still hear the plea of a politician for help. Aaron Burr, the third Vice President, in history had numerous scraps with the law. He once shot Alexander Hamilton in a duel and later was tried for treason in 1806 for trying to take New Orleans out of the United States. During his transport to trial in Virginia, he briefly escaped in Chester and pled for locals to help him. None did and he was recaptured.

Many Southern towns practiced their own form of justice during their history. Such spurred the 1983 TV mini-series called “Chiefs” staring Charlton Heston, all filmed in Chester.

That prosperity of Chester disappeared with the decline of the textile industry in the South. Several fires and a tornado also took their tole. Chester always rebuilt banking on hope for the future.

Today that hope is brighter.  New industry including glass and tire manufacturing have taken over the once cotton fields. People are working again and a budding of business is starting to fill the stores downtown.

Chester remains much as it was though. The locals often call it a “picture perfect city.” You won’t find the rush to change here. You will find in the faces of people the pleasure of living there.

I hope Chester continues to prosper and that more business comes to downtown, just not too fast or too many.

The only railroad still serving Chester is the Lancaster – Chester Railroad that now carry’s supplies and products to and from the new manufacturing plants. Gone are the Columbia-Chester Railroad, Charlotte Columbia & Augusta RR, Richmond & Danville RR and the South Carolina Canal and RR.

The land the Cherokee and Catawba Indians fought over has been known as the Great Warrior Trading Path, The Path to the Catawba, The Catawba Road, Indian Trading Path and Warrior Path.

Settlers largely followed these paths in what was called The Great Philadelphia Road.

Not to be missed on the history front is the Chester County Historical Society Museum, The Transportation Museum and Old Chester Jailhouse. Beware, the latter is suppose to be haunted.

Two other places very worth visiting are Genes Restaurant where locals gather for meals. Across the street you will find Ezell Hardware, South Carolina’s oldest hardware store.

Chiefs the TV mini series was filmed on location in Chester in 1983. The film production captivated the city with the star power of the 6’ 3” Charlton Heston and $9 million in production cost. The film centered on three generations of police chiefs in the fictional Southern town of Delano. The production had the potential to ruffle locals because of the discrimination and the Klan it sometimes portrayed. This never turned out to be the case, helped in part by Heston’s local fund raising efforts for a new library. He read from Melville’s “Moby Dick” at the towns square. The film also concludes in a period when the first black becomes police chief. It also emphasized the emergence of rights for black Americans. Interestingly, Chester actually elected a black police chief in 1962. On one of my visits to Chester, I met the current black mayor who is also the local insurance agent and bail bondsman.

Indigo is a plant that produces the color purple when processed. Plantations planted it on their less desirable land, often letting the then slaves work the land as they saw fit and in rare cases share in the profits.

Excellent publications on the history of the area include: Chester Historical Society webpage, Chester County.org/history, Discover South Carolina.com/articles-history, The Historical Resources Survey prepared for the City of Chester by Authors Bernie’s, Collars, Eichler, Hee, Lee and Overton through the University of South Carolina.