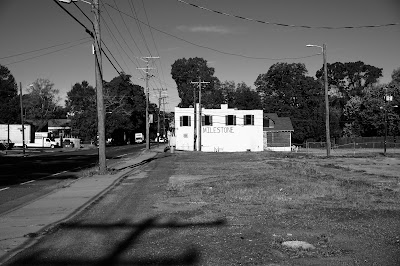 A few blocks from the glitz of downtown Charlotte you can find another city. Rough edged, industrial, run down and lonely places like Tukaseegee Road. They can haunt your feelings. Hidden gems though sometimes appear out of nowhere. Such is the case with The Milestone Club.

A simple looking two story building only distinguished by its street loneliness. Pulling back the history of the place tells a different story. The 100 year old building once a grocery, then a hardware store was turned into a music and night club venue in 1969 by Bill Flowers.

Over the years famous music acts like Nirvana, R.E.M. and Melissa Etheridge have performed here on their journey to stardom. A secret venue of sorts only holding 150 people in its dark graffiti filled walls. The only thing changed, a larger bar and improved rest rooms. Kurt Cobain once drank beer in the parking lot with the club crowd.

Flowers was once ask if The Rolling Stones had played there. He answered, “No, but the 12-Stones have.”