DANCING NEAR THE GRAVE (a desert Tale) 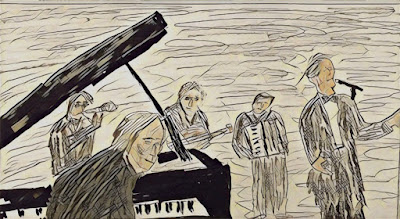 You could almost hear the band warming up from the highway near by. The random blurts of the horn, the rhythmic strobing of strings drawing it back into play, the notes sounded one at time by the piano player and a few notes of music from the singer. All sounds played out from a small town just over the Nevada border between LA and Las Vegas.

A forgotten place except for becoming a Mecca for sun seeking seniors. Just a couple of casinos, a small downtown area and lots of desert style homes. The music emulated from the one great place to eat, Vince’s. Nestled against a picturesque cliff surrounded by palm trees, it looked very bit the part of an oasis. The long-standing owner whose name graced the place spared no effort in making it a true fine dinning experience. One he ruled with standards and routines he would not bend. It attracted a loyal following among locals and the wise traveler who knew about the place. Vince always called it the tide of gray and finery that washed in every night.

People were expected to dress well, be prepared for a set orchestration of the evening and great food. A bar with a small dance floor greeted guests, it was separated from the dining area by two white doors with thin drapes over the glass. The band made it all happen. Finding good talent though was always a challenge.

Overtime though, a group of what Vince called past prime timers formed. Musicians who could no longer afford LA or were too old to play in Vegas. A piano player named Mel with long hair led the group. An accordion player, happy to be part of the band after a career of wandering unappreciated in fine dinning places in LA, a horn player who always stood at the back of the band, Paul an acoustic guitar play who kept the group in rhythm and the latest member, a singer named Roger.

Mel had searched long for a singer to join the group. Most still were in demand enough not to consider a backwater place. Roger arrived out of nowhere one day in an aging car. His Vic Damone whisky worn voice would play well with the crowd. Roger gave Mel a list of places he played, but Mel found little in the way of references.

A contact Mel had in Vegas knew of Roger and said, “This guy’s been all over the place. Everyone has a story about him, from Broadway to Vegas. Too many for a guy with one life. He couldn’t keep a gig no matter where he was. He had problems for sure, but no one ever found out the true story. Eventually he could not find work. I only met him once. He seemed haunted of sorts; a man being chased by something.”

Mel sensed all this to be true. He could see it a certain sadness in Roger’s eyes. Still he had talent. Mel took him on.

The band knew each other well and played off each other’s talent mixed with the occasional well used sly remark or joke to keep things going. Roger continued to remain a mystery. He let his voice do the talking.

Mel sensed things about music none of the other band did. He caught the hint of small cracks in Rogers voice, the missed note. The basics were still there, how he moved his diaphragm to give the voice depth.  The long years of drifting though had started to play out, matching in the wrinkles in his face. All the band suffered from the wear of years. Music though kept them going and alive.

Vince’s, a perfect place to forget all that. To for a short time not to worry about getting old or how long you would live. Back to a time when you were younger and had no worries, the music carried you there.

The evening always followed a routine. The band would play Cole Porter songs as dinners began to arrive in the bar around 4pm. A few would dance to the music. As 5 pm approached the band would pick up temple with more customers dancing, the dinning room doors would open, and guest would seem like they were dancing into tables with their names on small center cards adorning the table. There was only one seating per night. Then the music would turn soft again before the band took a break. After dinner, the guests would filter back into the bar where many would stay and dance.

Mel would turn toward the other band members and always say, “Here they are again, the grays dancing near the grave.”

One night in the heat of a desert summer, a stark looking dark-haired man and a blond woman were among the guests. Vince noticed them immediately. Too tightly dressed for LA, too wise for Vegas he thought. He sat them toward the rear of the bar against the wall. The shimmer of her dress shinned through the other dinners and the darkness of his look seemed to hang over the bar.

Mel mid way through the first set leaned over to Roger and said, I think you have an admirer. See the blond in back sitting with the guy. She’s been staring at you since we started playing. Roger looked up, quickly returning his eyes back the rest of the crowd and continued singing. Roger knew who they were.

The band continued playing as the evening progressed. The guests moved into dinner, the visitors casting a pall of curiosity and small talk among the other dinners. Mel could still see the couple through the glass of the dinning room door, their gaze still focused on the stage and Roger. The band took their break behind the restaurant. The heat of the day had fallen still in the darkness, it felt like time stood still.

Vince opened the back door, “Time to come back, dinners are getting ready to go back to the bar.”

The band started to come back. Roger hung behind, “I’ll just be a little longer, need to catch some more air.”

Mel nodded and followed the group to the stage. Music began flowing from the bar.

The strange couple moved back into the room. Not even looking at the stage, they moved toward the door. The man raised his hand slightly as he passed Vince, as if to say a due for a good performance. They quickly passed through the door and departed into the night in a black car.

From a distance the music could still be heard, except for the singer. Roger was gone, only the memory of his voice remained…