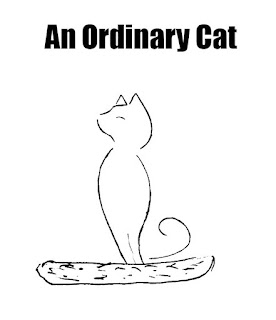 Steven stopped long enough to open some cat food for Oliver. It just sat there, its head in the air.
“Your just an ordinary cat, eat the food,” Steven said with frustration.
Oliver took a few bites and then poutingly moved back to his corner.
Turning toward his computer and work, Steven could still see the dent on the wall where Sarah smashed the vase, remembering seeing all the pieces on the floor.
That night still haunted him. Sarah’s angry words echoed one by one. “I’m leaving you. You don’t care anymore. I’ve just been a pretty vase on the mantle to you.  Now even that’s broken. You never spend any time with me. You just work, work, work. And what for, just some stupid ambition. To have more words on your business card. You cold ass hole.”
Her bags were all packed. Dragging them to the door she turned and said, “I don’t know what attracted me to you. I thought you would change. That there was some softness there. When we found Oliver and brought him home, I hoped Maybe that would add some tenderness to our relationship. Hell, Oliver turned out to be just as aloof as you. I’m leaving you both. Have a great life together.” The door slammed and she was gone.
Despite efforts, Steven never won her back. Now there was just the work, the remains of his ambition and Oliver who had become a pain in the ass. Maybe poetic justice, he thought to himself. The cat’s temperamental nature began to weigh on Steven.
Weeks later a final straw broke apart the remains of his well-ordered life. Oliver was no where to be found. Steven let the cat out each night to do his business and wander. One night Oliver did not come back.
For some reason, maybe just holding what was left of his life together, he had grabbed a flashlight and searched two nights for Oliver. He even made a missing poster. Despite the effort, Oliver was not to be found.
Now the small apartment seemed empty of everything except his cold drive to get ahead. He needed to get out into the world. He shut his laptop. Grabbing his coat, he walked out and down the street to a small coffee shop he passed every day. He’d always been too busy to stop in. Today he was going to.
He bought an espresso from the attractive woman at the counter and settled into a table near the corner. The café was narrow with tables radiating out from a small fireplace. He noticed the people sitting near the fireplace were distracted by something. They were glancing down. He looked closer and there by the fireplace to his surprise was Oliver, curled up in a basket holding court in this tiny place.
Steven moved to a table closer to the fireplace. It was Oliver, no doubt. He motioned toward the cat. No response. Then Oliver sat up and appeared to look back at Steven.
“Ah, it seems you have discovered our new mascot,” a sweet voice behind him said.  “He just wandered in a couple of weeks ago and never left. Customers seemed to take a liking to him. We’ve even thought about renaming the café after him but can’t figure out the right name.”
Steven turned and saw the voice was the attractive brunette behind the counter.
“I’m Emily, the owner. He seems to have taken special notice of you.”
Just then, Steven blurted out, “Oliver.”
“What a perfect name,” Emily said.
“That is his name and he’s my cat,” Steven said smiling back at Emily.
Emily laughed, “Everyone claims he’s their cat.”
She liked Steven’s grin and sensed a certain vulnerable searching. God knows she had invested little time with anything but working to the bone to make the café a success. Spending an extra minute or two with this intriguing client seemed somehow worthwhile.
“I’m Steven and it really is my cat.”
Emily laughed again and briefly touched Steven’s hand. “Well, maybe you should stop in more often and visit OUR cat. Oliver, hmm, that’s a good name.” Emily walked back to the counter but turned and glanced at Steven one more time.
Oliver continued to soak in the attention of customers and pay Steven little mind except an occasional noble glance. No way would Oliver be leaving with Steven. He decided to give up on that prospect.
Steven got up and walked to the door, smiling as he passed Emily. He glanced back at Oliver and said to himself, I guess there is no such thing as an ordinary cat…
David Young
(Dedicated to Brenda and the soft pawed Dylan)