HEARD AT THE BAR 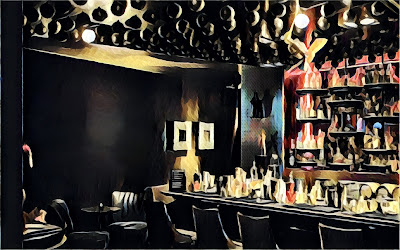 The Custom House Clock Tower crowned Boston’s financial district. Its bar a beacon every evening for young financial titans. The bars wood paneling reflected clubbiness and intimacy. Here they could exchange tales of the day and their success.

There were few chairs, except for stools at the bar. Most just stood with drink in hand. Joey’s group were regulars, all Harvard graduates, never shy about mentioning the fact. They could have met at the Harvard Club down the street, but their fathers were there. The Custom House allowed them more freedom to be and brag. Joey always seemed to lead the conversations and had the most swagger, his swept back hair and narrow eyes all spoke of blue blood.

Paul the bartender presided over the bar. A slight built balding man who always seemed in motion, scurrying from one end of the bar to the other to fill orders. If the Harvard crowd were the swells, Paul was the labor. He wore the working class heritage on his bland face. He stuck to his work and always hoped for better times. His position hard earned from the immigrant roots of his family.

Paul liked being there though. He had a keen interest in business, reading every article he could find on the subject. Most of the Harvard crowd treated Paul dismissively, ordering their drinks without as much as a gesture. Joey, though, liked to trade barbs on business with Paul, a sort of recreation for him. He never gave much credence to what he said, but sometimes there were surprises.

Paul often talked about the two apartment buildings he owned on Blue Hill Avenue. He often lamented about their potential, but how the City was closing in with demands for upgrades. He feared loosing them through condemnation.

Joey listened but assumed Paul’s claim was groundless. The only Blue Hill Avenue he knew ended at Back Bay, one of the most expensive areas of the City. No chance Paul’s property could be there. The Harvard gang all got a kick out of Joey’s recounting of Paul’s banter. Paul an easy target to make the group feel good about itself.

Still Paul had been right about Amazon selecting Boston as an East Coast operations site. The Harvard group had written it off long ago, but Paul continued to say they would. Paul sensed the property location they would choose. The Harvard group just wrote off Paul being right as a lucky guess.

Joey the day Amazon made their decision, moved over to bar and said, “You know Paul, you were right about this one. Some of the guys are calling you the Warren Buffet of the Custom House.”

Paul smirked, but could not hold himself back from a sly comment, “Buffet didn’t go to Harvard you know.”

Joey took his drink and walked away, then turned with audacity and said,  “He should have.” Then he disappeared back into the safety of the Harvard gang. Paul could hear them quietly chuckle among themselves. He didn’t care, Paul knew what got him here and who he was.

At the end of the bar, a man named John sat. He worked in the financial district too, but did not have the Harvard branding. Like Paul, he had come from simple roots and had labored long years to secure his position. With his largeness, simple sports coat and slightly ill kept gray hair, few would have guessed him a partner in a large commercial real estate firm. He liked to listened to all the banter each night. What you heard at the bar sometimes were business pearls.

John knew that Blue Hill Avenue wasn’t just Back Bay, but that it ran south of the City into the low income districts of Roxbury. One night, John corralled Paul at the bar long enough to talk about his apartments, “Your apartments are near Roxbury aren’t they?”

Paul acknowledged that and went on to say he was about to loose them. The City demanded improvements and he did not have the funds to accomplish them. He needed $100,000. Paul went on to explain the upgrades would free an adjacent lot he owed that could be sold for as much money as the buildings themselves were worth. Paul went on to explain how the property had been passed down from his family and details on the buildings.

John said, “Listen, I think we can get the money but we need drawings and plans on how the apartments will look after the improvements. You might call it intrinsic development. I’m in commercial real estate. I know someone at my firm who can draw the plans needed for the City to approve the upgrades.”

Paul looked at John, he had an honest face that showed many years of experience. Besides, what did he have to loose. Paul gave his the address to the buildings and thanked John. A week later, John had the full plans which he gave to Paul one evening before the bar opened. A second set of plans was in the packet, a smaller version Paul could easily reference and discuss with others.

John and Paul talked about how they were going to raise the money. John said, “The bank is right here in bar. Heres what we are going to do.” John quietly laid out the scheme to Paul.

The next night, the usual Harvard crowd was there. Paul seemed more busy than usual and distracted. He kept turning his back on the bar and going over something that looked like plans.

Joey came to the bar, “Hey are they going to revamp the place?”

Paul said, “No these are the plans for the upgrades the City wants on my apartments. The buildings are just simple six unit apartments probably worth $350,000 each.”

Joey replied, “Let me see them.” Spotting the address, “Hey these building are not near Back Bay, they are at the other end of Blue Hill Avenue, Roxbury, right?”

Paul nodded his head. Joey’s mind clicked, Boston was all about gentrification and redevelopment. Roxbury was ripe as the next target. There was money here. Joey’s eyes flashed, “You may have a gold mine here, these could be worth…”

Before he finished the sentence, Paul interrupted, “If I don’t find $100,000 this week for improvements, there will be no gold mine. No banks will help, I don’t have the income.”

Joey said, “Hey what if I could raise the money?” Thinking to himself that $100,000 might double or triple. “What if the backers took 10% ownership? We wouldn’t want anything to do with management, just an investment.”

Paul, nodded his head, “I’d be open to just about anything right now. My real estate guy even had a funding commitment form printed on the back of the plans so I could take the whole package to the city.”

Joey said, “Let me take the plans and talk to the group.” Before leaving the bar, he signed the commitment form guaranteeing $10,000 of the amount needed.

With plans in hand he went back to the Harvard group. “Hey chums, you always want to make money. Heres one for you. Paul does own two apartment buildings not in Back Bay, in a Roxbury location. You know the trends there. Who knows what they might be worth down the road. I’ve committed to $10,000. He needs $100,000 to meet upgrade requirements by the city. Pauls willing to ceded 10% ownership. Come-on you pikers and big talkers, have the guts to sign on with me.”

The group passed around the plans, pulling out their cell phones, checking the location, and trending stories about the area. One by one they filled out the commitment form. The ten that did moved toward the bar, handing back the plans with fully committed funding.

Joey said, “Paul, we are going to buy you a drink. We are all partners now. The Harvard gang raised glasses to toast Paul.”

John looked on and gave a sly thumbs up to Paul. None of the Harvard group had read the small print on the front of the plans. The buildings had a code designation of CFR 5.609. Low income, subject to rent control. Even with upgrades and area growth, they would be worth little more than they were now.

Paul though would benefit from clearing the property as a whole and could sell for a large sum the open lot, he owned 100%. John would handle the sale.