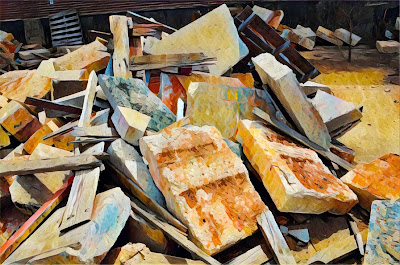 I spotted it from a distance, just a field of debris, but it drew me. Even far away, I could see random patterns chance had created. It had been tossed there near a simple brick building, but did not belong to it. Closer, I noticed markings on the stones strewn in between the tossed wood. The different colors making parts stand out. The building they came from a mystery, not visible in the area. Why were these still useful and beautiful things now debris. What would happen to them?

The debris existed someplace between usefulness and the dump, purgatory of sorts. It remained here in limbo for nature, man and fate to decide what will be done with it. Too valuable to give up on, but no longer of value enough to do something with. The debris like evidence of some misdeed removed from where the event happened.

It did not move or change. It was just there. There was an undefined art about it. The way it was scattered, the color muted by elements and the imagined story behind it all.

I only hoped the tearing down and discarding of it was worth it. Would the new thing built be as beautiful or useful for so long. Would it fulfill what was imagined at the expense of this…