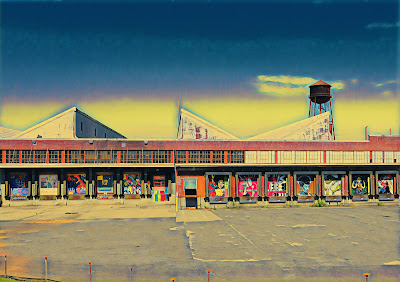 Charlotte like many cities has been described as a “beautiful set of gems thrust into the ground.” A wonder to behold from a distance but difficult to grasp up close. When you walk around some cities it can feel like that. There are the usual things, a sports stadium, a couple of large museums and big hotels. Most of the legacy buildings have been torn down to make room for the towering gems. On the ground, it's difficult to touch the gems and feel any humanism. They are too shiny, too perfect and without personality.

This can change with the courage of civic leaders. If you add some transportation, vision and young entrepreurs a city new can emerge. The city can take on new personality and richness. In Charlotte, risks were taken to extend the Blue Line light rail into the once industrial east side. Here you often found abandoned industrial buildings and ghost malls which once served workers.

This afforded the potential of new dense living and expansion of a fledging art community. Two years ago Camp North www.camp.nc sprung into existance. It’s 76 acres is filled with large industrial buildings being converted to art and shopping spaces. The site is rich with history. In 1924, it was a Ford plant which produced 231 thousand vehicles. Later it became a missile plant and other industrial endeavors. In recent years it remained vacant, the industrial buildings silent. That has all changed by City horizon planning (NC Vision Book) and willing developers.

There are a few shops at North Camp already and places to eat. Just hints of what can be its future. Wandering with a camera is especially rewarding. The petna of once grand buildings, the roughness of industry and the artists work all delight.

It’s interesting that these places and even parking lots of failed malls might be great assets for rebuilding to a city new. One with the personaility and liveliness we long for.