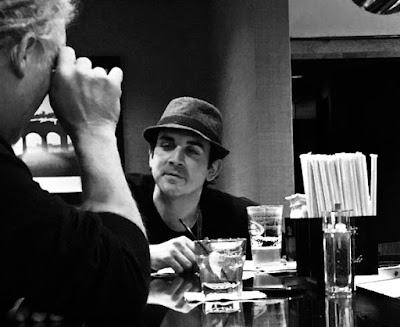 Joe didn’t like cross country flights. Too much time to think, too much time to remember.
The promises he once believed in. The long years in the trenches of business. His star rising in the early years with sales success and management positions. Only to fall back again with business downturns, changed ownership and the myriad of other things that happen in the life of a company man.

It seemed like age happened overnight, the gains and unfolding of problems. You kept putting all the pieces back in order. Now there were just the large accounts he managed to keep through the years. Holding on to them kept you from the door out. He could go on for ever. It was simpler to rub his face with his hand in acceptance of it all. Besides he needed to rescue a client. One with business problems who owed money.

He remembered many trips back East to NYC, Boston and DC adding major business for the firm. Now he headed for dirty Newark and the remains of this client.

The airport shuttle dropped him off at the hotel. Joe looked up and could see a faint HILTON that had be sandblasted off. A new sign over it, Blue Hotel. Easy to see why Hilton deserted this one, he thought to himself. It adjoined a commuter line into NYC. The hotel had a small lobby with check in on one side and a lobby bar on the other.

Joe got to his room and dropped his bags. He needed a drink and time to rub off the plane trip. Moments later he had a seat at the bar. Only the bartender and a tough looking guy with a hat sitting around the corner from him were there.

The guy with the hat pulled out a cigarette. “Hey man, you know better than that. No smoking here.” The bartender said as he turned and asked Joe what he wanted.

The bartender delivered the drink and then returned to sorting glasses and looking at a small TV with the Giants game on it. Customer service down his list of to do’s. But hell, there weren’t any customers. Those that did come to the bar were mostly commuters needing a drink before the rigors of home life. They were gone quickly. The bar, Joe gathered, usually looked like this.

Just then, the thing Joe feared the most happened. The tough looking guy at the end of the bar, who had one or two too many, wanted to talk.

Joe replied, “West Coast.” That usually all you needed to stop a conversation back here. No one in Northeast thought there was anything interesting out there.

“What brings you hear?”

“Ah, my favorite subject.” The hatted guy said as he danced the unlit cigarette in one hand. “I can tell you a few things about the city if you want.”

“Just here for a night and work tomorrow.” Joe shrugged.

“Plenty of time,” the guy went on. “I’m shall we say in construction. The labor thing, you know. Keep the project moving or put things together to keep the crews working and the owners in line. It’s been good to me. Own a couple of buildings now and built up a pretty good stash if I say so myself.”

Joe looked at him and nodded, ordering another drink. The bartender delivered it, not shedding a word or glancing at the other guy.

“Hey, let me buy that one and Mac, I need another one too.”

Joe explained he had a difficult business situation with money owed from a key client. He was here to get it resolved if he could.

“Familiar stuff to me my friend. If you need some help, I might have some contacts.”

“Thanks, but no. Long time client. Should go smoothly.” Joe replied. By this time, Joe wondered if Nick was a Wise Guy or worse. He didn’t want to really know and continued to nurse his drink.

Not getting the feedback he wanted, Nick changed course, leaning in toward Joe. “Hey, there are some places here in Newark where you could lose your soul. I mean really lose it. A couple of streets where you can get a life charge, a real-life changer. This place is sin city first class, well maybe not that type of class.” Nick laughed. “You ought to explore a little. You look like a guy who deserves a little excitement.”

Nick was about to elaborate more when his cell rang. “Yeah, yeah, I’m on it.” He started to get up, turning to Joe. “Got to go, business, you know.” Nick double knocked his hand on the bar. “Just in case, it’s Joe isn’t it? Joe my friend, if you decide to wander around tonight, here’s my number. We can see how strong your soul really is.” He gave a sarcastic chuckle as he handed Joe his number on a slip of paper.

The bartender grabbed the glass from Nicks spot and gave the bar a good clean wipe where he had sat.

Now just the bartender and Joe were left in the bar. The bartender still fiddling with the tally and glasses, his back turned to Joe. Behind the bartender a mirror stretched the bars length.

Joe looked into it, there were only empty chairs behind him. His face looked old, showing the long years in the business trenches. He thought about those years again and where he had ended up. A worn out hotel in a dirty city. Worn out, just like him.

He saw all those things in the mirror, but he also saw a husband, two sons who he had raised, a man who still had a portfolio rough edged as it was. He looked at the piece of paper with the wise guys number on it and then again into the mirror. He still had his dignity and there was always the promise of tomorrow. He wadded up the paper with the number on it, leaving it on the bar with his finished drink and left.

The bartender never turned around but watched Joe leave in the mirror, he knew a Wise Guy when he saw one.