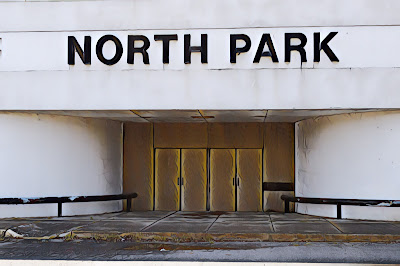 “When Haywood Earl Whichard showed up at a mall, you knew it was about to fail” – Dan Bell

It seems malls fall into three categories these days, Wealthy Malls, Failing Malls and Failed Malls. 25% of existing malls are projected to fail by 2024.

I’ve always been interested in failed malls. Maybe it is the ghosts of the life and promise once there. Maybe it is they are often apart from the city. Their empty lots a buffer, giving you time to reflect and wander with a camera. Maybe it’s the challenge of finding beauty and interest among the rubble. Whatever it is, I enjoy the adventure of finding and exploring these places. Some are dangerous and some seem cared for by unseen hands.

Failed malls have attracted an almost cult like host of characters. Porter Blackbird, Brian Florence and Jack Thomas created deadmalls.com. It lists all the failed malls by state together with their history. ABC News in 2018 did an article on another follower, Dan Bell. He created a series of YouTube videos detailing dead mall exploring. Bell says the fascination with failed malls is almost a “Titanic Syndrome,” they were beautiful and alive once but now gone forever. Perhaps the most interesting of the characters is Haywood Earl Whichard, a noble looking gentleman, who made his living buying failed malls and trying to restore them to commercial viability. A pursuit he worked at until his death in 2015 leaving in his wake malls waiting to be restored.

Failed malls have spawned their own slang terms including “Grayfields” (A mall that falls below $150 average sales per square vs a healthy mall at $450), “Label Scar” (fading or dirt left behind from a sign on a mall), and “Sealed” (when a mall is locked up and closed like coffins).

Near where I live, there are three failed malls (North Park, Freedom Mall and West Park) and two near failing (The Asian Central Mall and Eastridge). Visiting those about to fail, one senses the sadness of the shop owners. They stretch the boundaries of retail norms trying to stay open. Sometimes surprises happen, like at Eastridge attracting a major store’s closeout center (Dillards Clearance Center). These additions prolong the malls life and help reshape them.

Other malls simply can’t compete anymore because of size or changing wealth belts in the city. Many small malls started with the concept of tying two stand-alone chain stores together with a mall featuring small retail. The concept worked for a while, but ultimately suffered a slow death. The result of chain store failures or mergers reducing the draw of the centers. This coupled with changing dynamics of wealth belts and dense urban living eventually made the malls completely fail, the small business with them.

Freedom Mall was demolished in 2013 by the City. It left a huge vacant lot which stands like a ghost, one still lit at night by parking lot lights. West Park is a rambling hulk with only a discount shoe store left at one end. North Park Mall is now completely closed except for a furniture store at one end. Its empty structure remains as it always was including iconic wedge skylights. The parking lot empty except for the occasional truck left overnight. Still it shows a few touches of beauty from the past. Maybe just holding on to hope. Signs from the small business once there still adorn its front.

The most promising factor for North Park is the new Blue Line light rail which goes right by it. A good omen in the potential rebirth of North Park, perhaps into a mixed life facility involving residential, entertainment, restaurants and services. A trend many closed and failing malls are trying to recreate. People don’t want the same old mall, they want a new concept, they want something different.

Jeff Bezos once said, “The mall is history.” He might be right, but maybe just maybe, they will be reborn into something grand again.