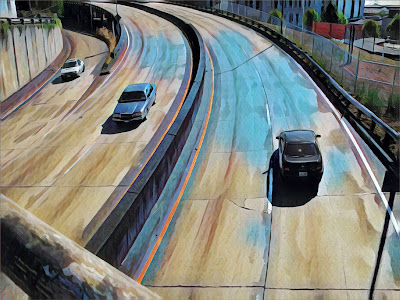 The much maligned Seattle Viaduct is gone. Torn down for some imagined improvement to the City. It will be missed by at least by me. I spent 25 years in Seattle and traveled the Viaduct every day. Engineers felt it could be rebuilt for a fraction of what replaces it. An opportunity now lost.

I first drove through Seattle in the 60’s right after the worlds fair on the way to Vancouver. The Viaduct the only way north. That evening the city bask in the warm glow of a Puget Sound sunset. The only tall buildings were the Smith Tower and the Seattle Seafirst First black box. The promise of the city and magic were everywhere. All seen from the Viaduct.

Much of my business future lay before me, but I did not know it then. When my wife and I moved to Seattle to begin our careers, we lived just south of downtown.  Our jobs were in the core of the city. The Viaduct always the best route. You could labor 30 minutes on I -5 or be in town in 5 via the Viaduct.

Viewed in just the right place, Seattle then could look like a city built with a Tinker Toy set. Framed by water, roadways hung from hillsides, buildings terraced down steep hills, bridges everywhere and the rawness of the Viaduct holding it all together.

Seattle is a business town. A boom and bust business town that always made money when times were right. The Viaduct reflected this, all business taking people through the city with haste. It never asked to be beautiful and only wanted to be respected for the important role it played.

Yes, it began to crumble into an unsafe state. I saw the cracks widen as I drove onto it over the the years. It still served to the end though. You could walk under it to shops and bars made unique by it being there. You could hear the melody of sounds from the traffic passing overhead, see the lights of the streets and buildings above. All played to an audience of water to its west and the moving necklace of the car lights on its deck.

After work we often took the straight shot via the viaduct to Louies Chinese Restaurant and it’s classic Mai Tai. Or took the back route it offered to Canlis or a hundred other special places. Louies is long gone now. Many of the other places I knew changed or gone. The city as I used to know it is gone.

The Viaduct is gone. It’s special music no longer heard.