TAKING A SLICE OF THE BIG APPLE 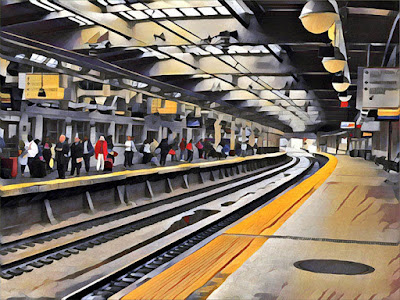 Part of the fun of travel is trying something new. Staying in the heart of a big city is exciting. The action and attractions are right outside your door. Prices though are getting high. A stay in a downtown New York City hotel often costs $300 or more. Not to mention the $75 cab ride each way and the $20 glasses of wine.

There are other ways to take a “slice of the Big Apple.” On a recent trip to New York, I flew into EWR Newark Liberty International Airport and stayed at the Hilton at Newark Penn Station. Newark is a short 21-minute commuter train ride to Midtown. There you can catch subways to almost any attraction in NYC, such as MOMA, The NY Public Library, 911 Memorial, and The Metropolitan Museum.

Flights to EWR are low cost because it caters to cruise lines, offering volume discounts. The Hilton I stayed at was $118 a night. It is attached by a causeway to Newark Penn Station (the sister station to Penn Station NYC). Trains run every 9 minutes. Better yet, Hilton will pick you up at the airport for no charge with their shuttle.

There are other surprising pluses to staying on the outskirts to big cities. I found Newark to be a very interesting place. It has a strong Portuguese population. There are numerous wonderful ethnic restaurants near the hotel. I dined one night at Don Pepe, just 300 feet from the hotel. It opened in 1981 and is a Newark institution. I was greeted by the owner Don Pepe and his head waiter when I entered. A wonderful menu and tastes followed.

From an art perspective, Newark has great architecture, a vast array of characters, and urban scenes. A photographer’s feast. The Newark Museum, while not in the league of MOMA in NYC, is a worthwhile stop.

Staying on the outskirts of a big city has many advantages, but has some tradeoffs as well. Transportation systems can be challenging. For instance, there are two in Newark (PATH and NJ Transit). Each require separate tickets. Most of this can be sorted out at the information booth in the station. Ticket purchase is easy. Less easy is the walking inside the stations both in Newark and NYC (many stairs, escalators, elevators).

On balance though, using this method to take slices from the big city is a solid and low cost choice. A choice with experiences that can surprise and delight.