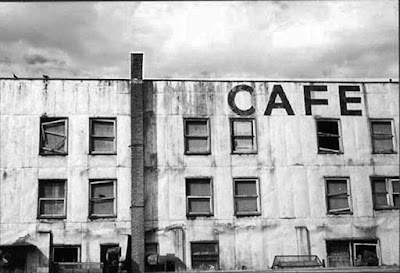 Aberdeen is a raw windswept town on the Washington State coast. I knew it from my business days. It is a hard scrabble place fashioned by the demise of a once flourishing timber industry. There were still glimmers of opportunity, but many who lived there had given up hope. Aberdeen is now perhaps best known for the birthplace of Kurt Cobain and his Grudge Rock.

Kurt Cobain, though, is not the only famous person from Aberdeen. Lee Friedlander, an icon of photography, grew up and went to high school there. Friedlander, now 79, is still alive and taking great photographs. He is famous for his series on Jazz legends, contemporary scenes, and street photography.

The story of how he made it from Aberdeen to fame in Los Angeles and New York is an example of how there are bridges to success even in the toughest of places.

The answer to Friedlander’s success rested on determination and people skill. He set his site on a goal and sought the help of a local freelance photographer named Stan Spiegel. Spiegel was also a part time DJ. As their friendship grew, they would travel to Seattle to hear jazz greats Charlie Parker and Miles Davis. The music freed his creative mind. Spiegel began helping Friedlander with various photo jobs around Aberdeen.  And once he learned the basics from Spiegel, he experimented finding his own style. Experience are one thing, but learning the next level of skill was another.

Friedlander did not have enough money to go to school, so he spent long hours studying the craft, using library books and videos. When he finally had enough money to go to school in LA, he found he already knew what he needed to know. Early on, he leveraged the ability to get to know people and network. Once exposed to the greats of music and other art fields, those skills allowed for special photographic opportunity.  Before Madonna became famous, Friedlander paid her $25 to pose for him. Prints of those photos now sell for over $35,000 each.

While the small business nature of towns, the type that afforded Friedlander his jump start, are largely gone. It seems to me that the elements for success are even more present in today’s social media world. It still takes the work though to find the right mentors, the appetite to learn, and people skill to cross the bridge to the goals and dreams you have.