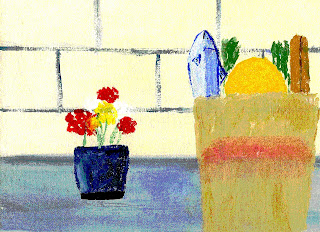 The parking swirled with activity. A young man loaded his groceries into the back of his car. He turned and glanced at the older worn car pulling into the handicap space just down from him. The paint faded, it needed a wash. Just curiosity I guess, everyone cheated and he wanted to see if this driver was really handicapped.

Abe reached in front of Ruth, trying to find the handicap placard in the glove compartment, then gave up the effort, thinking that once people saw him and his walk, there would never be a question. The young man drove off.

Abe slowly turned his legs out of the car, holding on to the door top for leverage. He looked back at Ruth, as if to ask “do you want to come?” She motioned him on. Abe straightened himself, his thin gray hair blown by the wind.

He still wore a long sleeve shirt and khakis, but steps were measured out carefully now, always wary of a fall. Most onlookers wondered if he was going to make it to wherever he was going. The grocery store seeming like a distance equal to the Rift Valley with as many dangers.

Still they needed groceries and Ruth too feeble to accomplish on her own. Besides there was the pride. Inflation though had become just another robber of their senior years. First there was health declines, children who moved too far away, and now the quiet robber of higher prices ate away at their small income.

Abe took a last look at Ruth sitting in the car, no expression on her face. A resignation or remembering maybe about all the chores, hating them then, now longing for being able to do them again. Abe strained to look again, almost like seeing if Ruth was still alive, before he entered the store.

Time passed slowly before Abe came back with just the store flyer in his hand, no groceries. He got in the car and handed Ruth the flyer. She read it carefully front and back. With sadness, she put the flyer down and turned to Abe, reaching out her hand touching his softly. They would drive to the next store, hoping for lower prices and try again…