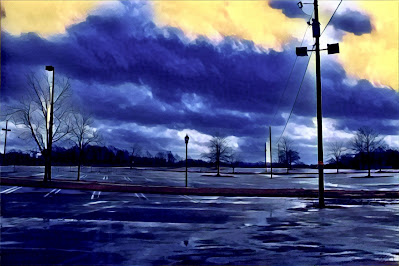 Thousands of cars pass it by everyday. To most, it just looked like another ordinary urban landscape. In the distance, beyond the broken parking lot with a few area lights flickering on leaning poles lay the concrete slab that was the corpse of the once great Eastland Mall. Gun shots rang out in the mall in 2005 as rival factions of the Happy Valley King’s gang fought it out. They did not kill the mall then, but its decline began. During its life, the mall had many more stories to tell.

Eastland Mall began as a dream in 1975, billed a “crown jewel of Charlotte Commerce, a mecca for middle class shoppers, the heart of the Eastside.” The city hoped it would keep the Eastside growing and together, but things changed.

The demographics of the Eastside were strong middle-class with good payrolls from the light industry. Developers saw opportunity. The already successful Southpark mall had opened in 1970 just six miles away. It catered to high end stores and clientele. The middle class needed their shopping center.

Eastland Mall seemed perfect. It became the largest mall in the state. Belk, J.C. Penny, Dillards, Sears and Ivy all joined. Chandeliers and large ice rink adorned the mall center. A movie theater with three screens and a food court (novel at the time) were added. People flocked their fueling its early success.

It was a dream cast too far though. Things started to change even before the shooting in 2005. The middle class began moving to the suburbs, leaving in the wake a demographic with less income to spend. Other malls in the suburbs like Northlake and Concord were built. People grew less inclined to drive all the way to Eastland. Major retails began to shutter the Eastland location.

The mall reacted by adding next tier (Burlington Northern, Dollar Store, Fred’s Discount) retailers to keep an inflow of people. Then the shooting in 2005 and the growing image of the crime in the area dampened everything.

In 2008, the Mall filed for bankruptcy and moved to fully closing in 2010. The lender sized control of the property. Eastland which cost $50 million to build now rested on the lenders books for $2 million.

The story did not end there. The City purchased the property in 2012 intent on rescuing the “Corridor of Crap” as the papers called the mall. The City demolished the mall in 2013 to remove the blight.

Numerous proposals have followed to bring the site back to life including a movie studio, community center, amusement park, small business center, and affordable housing. None formally took hold. A smattering of business activity did start filtering back into the site in the form of a flea market and skateboard park. Some big money with plans for a MSL training center and luxury apartments were floated for a time. Those plans caused local pushback.

The now diverse demographics of the area including many migrants wanted development that was more accessible and useful for the community as a whole. So new dreams are now flourishing again. A possible transit center, small business opportunities and green open spaces. All are hoped for on this now ordinary land with stories to tell.

Urban wanders like me might enjoy reading “The Interpretation of Ordinary Landscapes: a collection of geographical essays” by Donald Meinig and photo exhibits by Stanley Wolukan-Wanambwa who had made a study of such places.