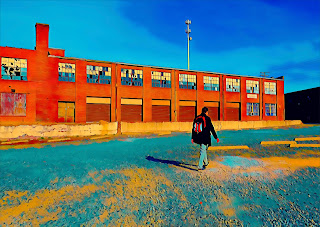 They were bright of red brick worn by time and stretching as far as you could see along Railroad Street. It seems like every small town and city in the South has a railroad street. Where long iconic textile and furniture factory buildings once flourished, where thousands worked and trains crossed rails loaded with goods. Gone now those days and sounds, only the buildings remain.

Some towns have torn down the factories, others just leaving them to their own demise. Only a few like Lexington NC have realized their potential for community change. Lexington has cleared away the debris and kept buildings clean. They are like a living museum, gems waiting to be used again.

Lexington envisioned the “Depot District,” using it as a slogan for rebirth. To make it work, they developed incentives to foster its growth. Businesses including Crazy Joes, Bull City and Goose & Monkey Brewhouse have already moved in. Other buildings such as NC Candy Factory are under lease. An outdoor amphitheater and refurbished civic center have been completed with city and local business support. A transportation center bringing Amtrak service back to the community is planned.

Too often the most iconic and beautiful old parts of a  city are torn down. Followed by large incentives paid to box stores that end up making a town look just like the one down the road. Buildings and small business are treasures to be carefully handled and supported. A Railroad Street can be a place of rebirth, keeping the colorful character that makes a city unique. The Walmarts certainly help a city, but Depot Districts offer the allure.