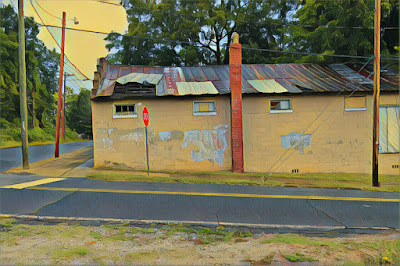 It had been many things, the small building on the corner of Mill St. For a while though, Reverend Rick spoke sermons here to a small flock. Workers with memories of better times and paychecks. Now just social security, food banks or worse. The giant empty factory building still casting a dark shadow.

They felt unworthy of going to the big Baptist church up on Railroad Street. No one ask Reverend Rick how he came to this small place. He was thankful for that, not wanting to share the wandering years and drink. Somehow he just appeared one day, putting a simple cross above the door and giving sermons. He used the small offerings to fix the place as best he could. The market next door giving him food and a room in back to sleep.

Then one day the Reverend was gone. Only the cross remained. Overtime the building again fell in disrepair. Rumors had it that an Asian man planned a bar there. Sometimes neighbors walking by claimed they could still hear Reverend Rick sharing the lords message about life’s 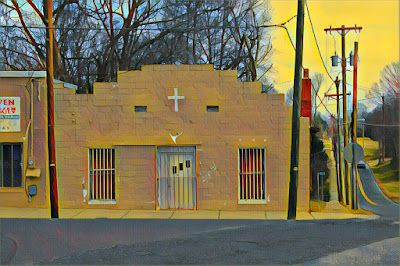