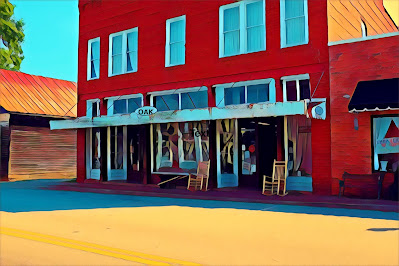 The rich farmland of the Piedmont stretched for miles in every direction from a small one street southern town. Far enough away from a major city and a Walmart, the town enjoyed its own economy and a railroad spur for farmers to ship crops from.

A fixture of the town was Oak Hardware. It had been there for ever started by Fred Oak. The store prospered in long time clients. Farmers who needed everything from bolts to an extra bag of feed from the back warehouse.

It surprised everyone, when Oak retired and sold his store to his long time hispanic employees, Peter and his wife Lupe. Rumor about town was that he sold it on a handshake and an exchange of a $100 bill. If you really knew Oak though, you would know this had been in the works for years.

Oak first hired Peter as a runner, answering calls from farmers who could not leave their fields, but needed some hardware item. Peter would go and in doing so got to know all of the clients.

Lupe always worked in the store keeping shelves stocked and learning about inventory. Her gentle smile and product knowledge wore well with customers.

Peter and Lupe worked hard and gained Oak’s respect. He knew they would always be a couple. Besides selling to an outsider only meant problems. They would have to gain the trust of the farmers and learn the business. Peter and Lupe already had these. Oak felt they were his best chance of being paid for his business over the long term and not having to come out of retirement to take it back.

Lupe had an idea of starting a small woman’s clothing and gift shop in a side room of the hardware store. Mr. Oak listened to Lupe’s ideas politely, but never said yes. To him, hardware and clothing just didn’t go together. Lupe kept her idea in her heart over time, never bringing it up again to Mr. Oak.

Oak and Peter would have breakfast every Monday to discuss the week of business and things that needed to be done. On the day of the sale agreement, they met for one final time. Oak talked about the history of the store and expressed confidence in Peter being able to carry on the tradition. At the end of breakfast, Oak handed Peter the key and they shook hands on the deal.

Peter rushed back to his modest home to pick up Lupe. She was on the porch waiting for him. They drove to the hardware store. Peter turned the key in the door for the first time. They walked in and stood for a moment. Their future before them. Lupe walked around the displays toward the side entrance. She ran back to get Peter, urging him to come look. There in the corner of the store was a small cleared space with hardwood floor newly polished. A small display case stood in front with a small sign reading Lupe’s clothing and gifts.