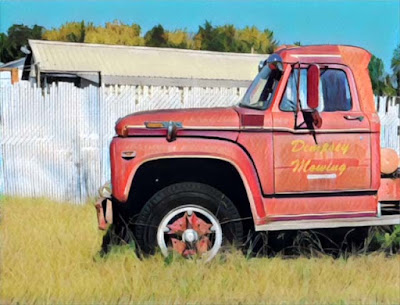 Last year’s mowing season provided good profit for Dempsey. But it was long over, the grass of the South turned brown and dormant. Dempsey read once about why the grass did this: Cold weather hampers the roots from extracting the rich nutrients needed to stay green and grow.

He didn’t really understand all the technical detail. Brown grass always meant an end to his cash flow. The winter gave time for equipment repair and odd jobs, but little money. Dempsey sat sharpening the mower blade on the small bench in the wood shed behind his house. He smelled a pleasant scent from the house kitchen drifting toward the shed. Dinner. He got up to look out the window toward the house which sat on the other side of a small garden. Catching his image reflected in the shed window, he rubbed his short gray beard and thought for a moment the quickness of the years past.

The mower man turned again and resumed the sharpening of the blade. He hoped it would stretch through another season. His mowing machine, now eighteen years old, sat at the end of the shed near the door. He worked the file on the blade, his arms and hands leathery from the sun. The mower had no canopy. Most commercial grade mowers only lasted ten years, somehow his care kept this one around. It worked well, a little slower now, the yellow paint worn in places, but it could still do the job set out by his customers. The old truck and trailer used by Dempsey sat beside the shed. He felt sensitive about its looks.

One time he got a quick lunch at a local fast food place. The shiny trucks of a major lawn maintenance company were parked in the lot, the workers having lunch. All wore the same bright green shirts with the company name on the front. He sat close enough to overhear them making fun of his truck outside, that had a faded “Dempsey Mowing” on the side. He saw a fat worker smirk and say, “What a junker of an outfit.”

Since then, Dempsey always parked the truck around the corner of jobs, out of site of the owner. He used to do just homeowners lawns. One homeowner, John Able, turned out to own a complex of office buildings near town. Able liked the care Dempsey took with his lawn and his dependability.  He ask Dempsey if he could mow at his building complex.  It was a great break, one normally going to a landscaping company.

The building grounds were a full of berms and small open areas. It took time to mow them right and not leave unsightly marks. Something a larger firm might rush through. Still questions always swirled about next season. Work had no guarantee and competitors just like him, men with only a mower to their name, would be out vying for jobs. They might bring newer equipment and talk better than him.

To beat the competition, Dempsey had visited the building site a few weeks ago and asked the receptionist if he could speak to Mr. Able about the mowing work this year. She had politely said, “He’s tied up with meetings today, but I am sure Mr. Able will call you soon about the work. We are all looking forward to spring.”

As Dempsey left, he spotted Able walking the grounds with two other business people. He thought about approaching him, then thought better of it. As he climbed back in his truck, he worried. Is he selling? Maybe he is doing away with the lawn for another building or hiring a large landscaping company? All these questions swirled in his mind on the drive home.

Weeks had gone by since then. All he could do now was wait. A shout from the house interrupted his work, “Dempsey, dinner is ready.” His wife, round with the same years as him, had a cafe waitress job that paid a small wage and tips. They struggled to make a life and raise their two kids. Somehow it worked though, but only with his summer income.  He lacked the education or special skills to get better regular work. Their kids were on their own now. It was just the two of them now. They shared their uneven life with love that filled in the rough spaces.

Dempsey walked in the house and went to the rest room to wash his hands, then change his shirt. He sat down to dinner, recognizing some of the vegetables from the garden on his plate. He looked across the table and still saw the beauty of the girl he married so long ago. They joined hands and gave thanks for the meal and life.